Is Starlight A Wifi Signal? – The Portals (LIVE) 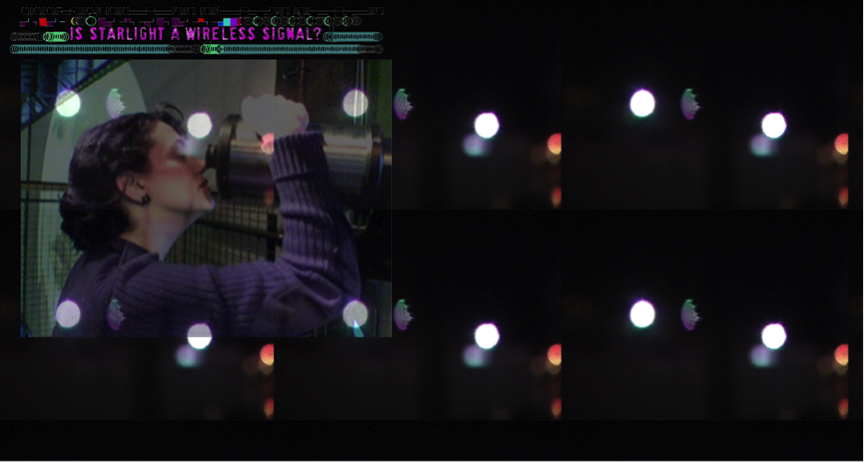 On Wednesday 12 June 2013 Nancy Mauro-Flude and Crystal Thomas will create a live, networked performance online, physically in Darwin, from Hobart and through The Portals screen in Sydney’s Chatswood. A performance between Darwin, Hobart and Sydney.

Talking through the stars … Is Starlight a Wifi Signal? is a meditation in which the artists question what it means to be human through a poetic account of how we automatically engage with ubiquitous transmissions. We have always navigated by the stars, and now as a species, we regularly and increasingly, habitually use networked communication systems (GSM, Bluetooth, Wifi, RFID, QR, AR, Radio). These omnipresent transmissions and signals are a new kind of fictional species that exist with/in us; new habitats, cosmographies and cosmologies. The networked performance shows a relationship between the body and the greater universe, generated through performers’ gestures, inscriptions and text. You, the expanded audience, can reflect and interact with the performance through your computational devices via twitter, using the hashtag #starlight to embed into the imagery. Is Starlight a Wifi Signal? is a cosmogonic ritual; traces of code, intertwined with translucent light, evoke tendrils and elements in a telematic tableau vivant that explores how we deal with the tensions of ephemeral collaboration and physical separation as we negotiate relationships of presence filtered through networked objects via computer software and digital networks.

Free – All are welcome to attend in Sydney & Darwin