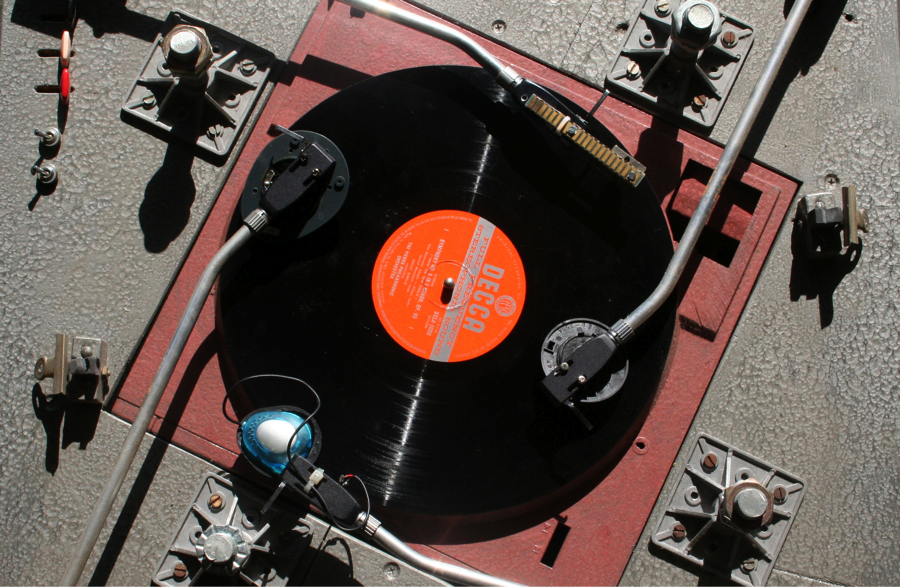 Presented by ISEA2013 and the ABC.

Dragged Backwards Through a Hedge
Ian Andrews and Garry Bradbury

ISEA2013 presents Sanity Clause, a collaborative performance project between Ian Andrews and Garry Bradbury. The project utilises a variety of redundant technologies and home constructed equipment to make music from vinyl records. The equipment used includes modified turntables, record players constructed from other equipment and appliances, and home-built cartridges and styluses. These are used to play a variety of objects ranging from cut up and re-assembled collage records to metal discs, sandpaper discs and other things. This project adheres to a rather strict constraint that all sounds must be produced by vinyl disc reproduction technology.

Ian Andrews is a Sydney-based media artist practicing since 1981. He studied film and sound at the University of Technology Sydney, graduating with First Class Honours in 1994. Andrews has exhibited his works in national and international film and media art festivals. In 2001 he presented a retrospective of his work, from 1983 to 2000, in Dlux Media’s d>Art.  In 2004 he exhibited work at the Australian Centre for the Moving Image in Melbourne, the FILE festival in Sao Paulo, and ISEA2004 in Helsinki. He teaches sound theory and is currently a candidate for PHD at UTS.  ian-andrews.org

Garry Bradbury has been an exploratory electronic musician/sound manipulator since 1979. His practice revolves around the exploitation of found sounds and application of programmable or automated methods to evoke a previously unimagined, convulsively beautiful musicality, both precariously delicate and nightmarishly brutal. This has usually entailed mucking about in a room with boxes, wires, pieces of tape, etc. This compulsion to collage is also evident in his visual works (video and 2D). 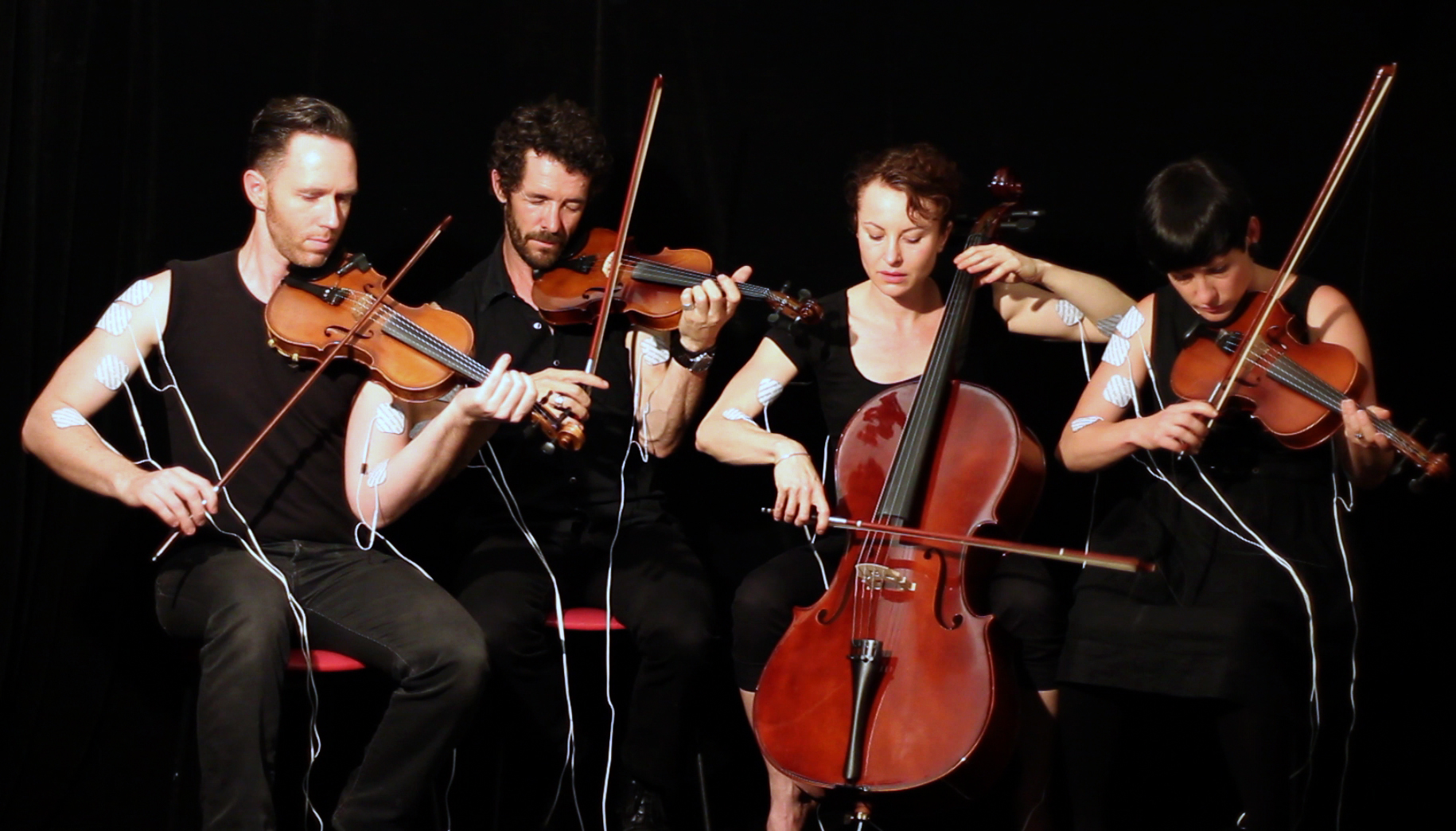 Are the musicians in this string quartet playing – or being played? Their movements are controlled by custom-built electric muscle stimulation (EMS) devices which trigger strange, paroxysmal movements via electrical impulses, resulting in an other-worldly aesthetic. Inserting robotic elements into the highly formalised, traditional paradigm of a classical quartet exaggerates the man/machine interfacing that is central to most contemporary music creation, production and performance, highlighting our growing reliance upon machines to perform repetitive or difficult tasks that we used to do ourselves. The work questions assumptions about creative agency and free will both in and beyond the context of musical performance. By controlling performers’ limbs to execute complex rhythms and techniques which they would be unable to perform of their own volition, the work speaks to the ‘democratisation’ of music and art making with the advent of user-friendly technology. Imposing external control over physical agency, it also questions assumptions affirming the physical realm as an expression of an intentional inner self.

Michaela Davies maintains a multi-disciplinary art practice across installation, sculpture, sound, performance and video. Also a doctor of psychology, her work is informed by an interest in the role of psychological and physical agency in creative processes, and how obstruction can change the trajectory of development. Michaela’s recent work has used live percussion, sonified data and composed MIDI scores to control motor function in performers via electric muscle stimulation (EMS), with recent performances throughout Australia and also in New York. In addition to exploring sound in installation/ performance, Michaela plays bass guitar in numerous projects. Her musical collaborations and compositions are an eclectic mix of genres. 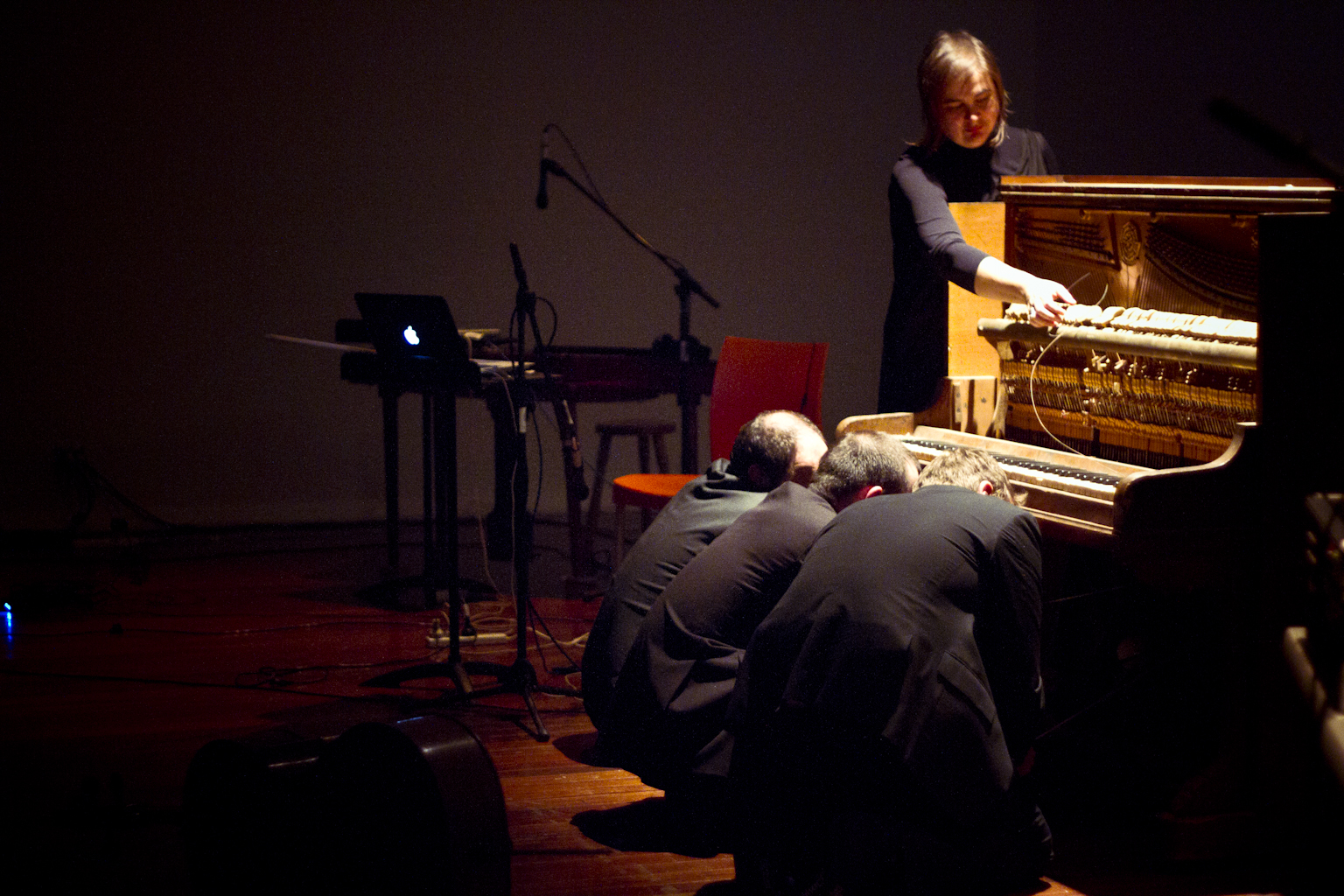 For ISEA2013 Decibel will present  new compositions that focus on the lower end of the sound spectrum, and feature combinations of bass flute, bass clarinet, double bass and electronics. The works showcase graphic notation as a digital, mobile entity. Using ScorePlayer, an App designed by the group to read certain types of graphic scores, and other mobile score programming, the works feature improvisation, real-time electronic processing and the use of colour to guide score reading.

Cat Hope is a composer, sound artist, performer and academic. A classically trained flautist, self-taught vocalist and experimental noise bass player with an active performance profile as a soloist and in music groups, she is the director of the internationally recognised music group Decibel and has toured internationally as a noise artist. Cat is currently a researcher at the Western Australian Academy of Performing Arts, Edith Cowan University.

Lindsay Vickery composes and also performs across Europe, the USA and Asia. He is a highly regarded performer on reed instruments and electronics, touring as a soloist and with ensembles internationally. He was a founding member of Alea New Music Ensemble (1987-92), Magnetic Pig (1992-), GRIT (2001-), US-based multimedia group SQUINT (2002-) and most recently HEDKIKR (2002-). He is known for his composition and performance with interactive electronics, and lectures in music at WAAPA, ECU.

Mark Cauvin is a composer and performer who creates music that is an imaginary playground of wacky worm wrapped in a void of strange sounds. He composes for musical instruments, sound objects, lights and moving images, and during performance his double bass transforms into a piece of furniture, an amplifier or a water drum. 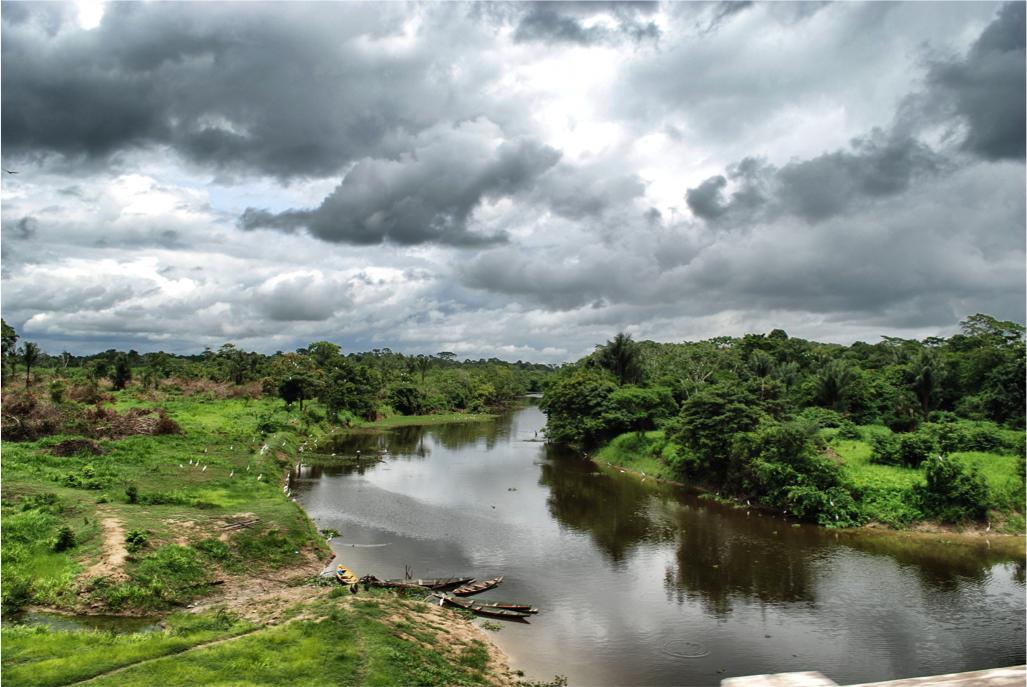 For ISEA2013, Leah Barclay has composed an electroacoustic performance piece based on environmental field recordings made during her Sound Mirrors project, in which she travelled through Australia, India, Korea, China and Brazil capturing the sounds of significant rivers and collaborating with their surrounding communities. The source materials range from hydrophone recordings of the Amazon River Dolphin in central Brazil to pilgrims chanting at dusk on the banks of the Pamba in southern India. Shifting Nature explores rivers as the lifeblood of communities and underscores the value of listening in our current state of ecological uncertainty, weaving diverse cultural and natural soundscapes into a dense and unpredictable sonic environment.

Leah Barclay is a composer, sound artist and curator working at the intersection of art, science, technology and the environment. Her work has been commissioned, performed and exhibited to wide acclaim internationally, and she has received numerous awards, including the Premier of Queensland’s inaugural National New Media Scholarship (2009), the Asialink Performing Artist Residency for South Korea (2009) and the HELM Award for Environmental Art (2010). She has received major grants to produce ambitious community projects, and has directed and curated intercultural projects across Australia, India and Korea. Leah is passionate about the role interdisciplinary art can play in community empowerment, social activism and cultural change. 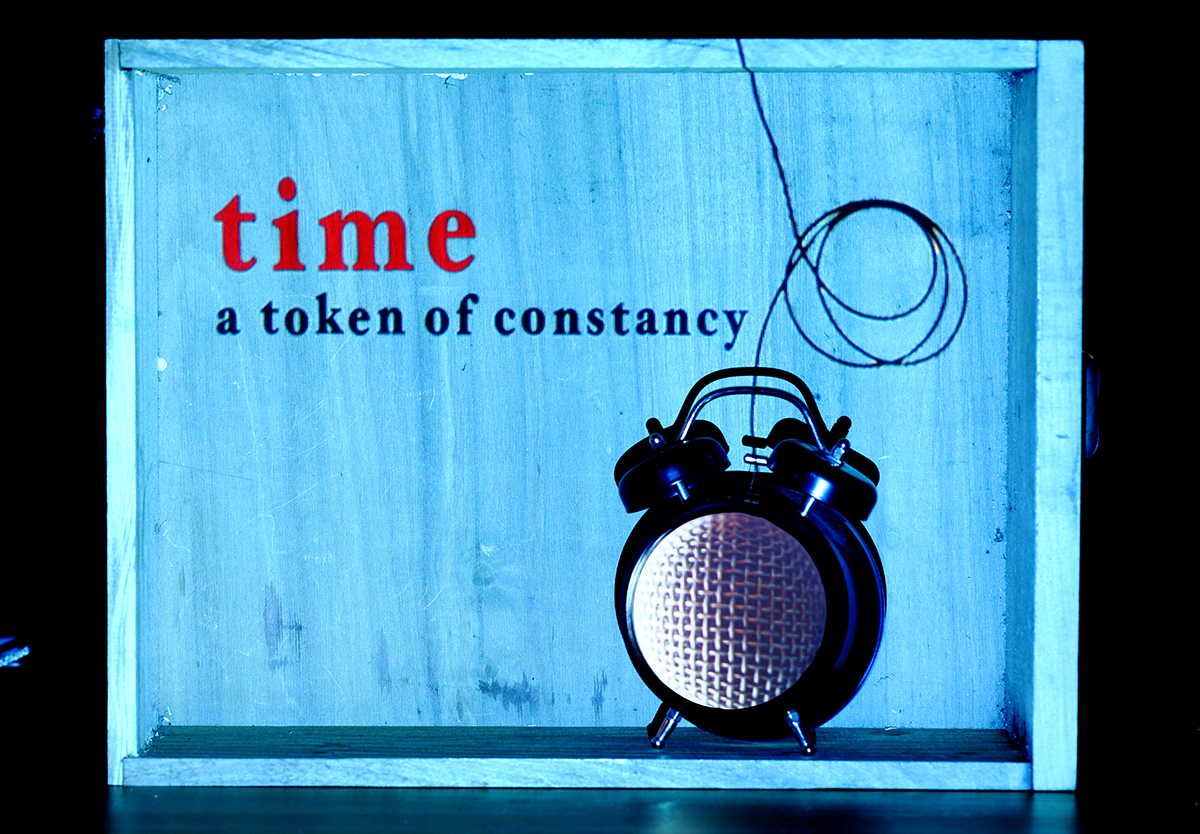 In this fascinating look at – or rather listen to – time, Shane Fahey collaborates with horologist Evan Carr and recording engineer David Carr and collectively they entertain whether time is “an increment of revolutions or a lagging magnification of vibration”. Fahey comments that “its image as a series of numbers seems to be such a useful aid for setting up activities but the sound of ticking is so delightfully paranoid!” He sees analogue timepieces as early robots, “many faced harmonic character[s] with proto-intelligence”, a “mesh of teeth and tiny fields of electromagnetic current … abject personalities with bare bones drive”. In this work they lay aside “notion[s] of productivity and equation with money”, and explore the pitch perception implications of different microphone characteristics located in close proximity to such timepieces; the shifting phase relationships between two or more timepieces sharing the same ‘sound stage’; and natural and artificial stereophonic images of two movements.

Evan Carr’s “involvement with the world of radio broadcasting came about due to his passion for music, and because people often said he’d be good at it. Turns out he was rather good at it and after 10 years of broadcasting on Melbourne community radio 3PBS FM, has produced close to 400 shows. His current program The Art of BLEEP! (www.pbsfm.org.au/artofbleep) has been broadcasting since 2008 at midnight every Sunday and features a wide variety of local and international sounds in the electronic and electro-acoustic vein. Within the confines of broadcasting, Evan has often challenged the audience and himself by on-air experimentation with audio collages and multi-source performances live in the studio to expand the concept of musical interpretation and involvement.”

A talented multi-instrumentalist in his own right, music producer David Carr‘s “mission is to make every production hold its own both artistically and sonically against the world’s stage and all within an Australian budget. He brings 25 years of experience and the benefit of having learnt his craft whilst under the guidance of experienced producers and engineers and paid for by the long gone era of 1980s record company excess. It is common for music industry captains to assume David’s mixes are American or that his studio is all analog tape based. David is quick to remind us that all recorded musical sound must begin as a vision in the mind in order to take shape, so tools are only there to help one realise that sound in the organic environment. In 1998 David acquired a studio business and began Rangemaster, an analog and digital recording and production workshop in Melbourne’s east. In 2001 David produced  Antiskeptic’s Memoirs and the single Called became a JJJ Hottest 100 CD inclusion at number 11. In 2004 David produced Kisschasy’s Darkside EP which received mainstream airplay and catapulted  the band to national success. They signed  to John Watson’s group. In 2006 David was recruited by Taxiride to co-produce their 3rd album Axiomatic, which delivered the hit Oh Yeah.”

Honi Ryan is “an interdisciplinary artist based in Sydney and the Blue Mountains, Australia. She works across media-arts, performance, social sculpture and installation and is interested in art as alternative models for living. Her work has cross cultural concerns and approaches the body in dialogue with electronic media, a body that is both an organism and a part of social behaviour. Ryan has performed and exhibited in 8 countries in traditional and non-traditional contexts. She received a Bachelor of Visual Art with Honours I from Sydney College of the Arts, where she was awarded the University Medal in 2007. She also studied at Cologne International School of Design, Germany and is currently an MFA candidate at the Transart Institute, Berlin and New York.” 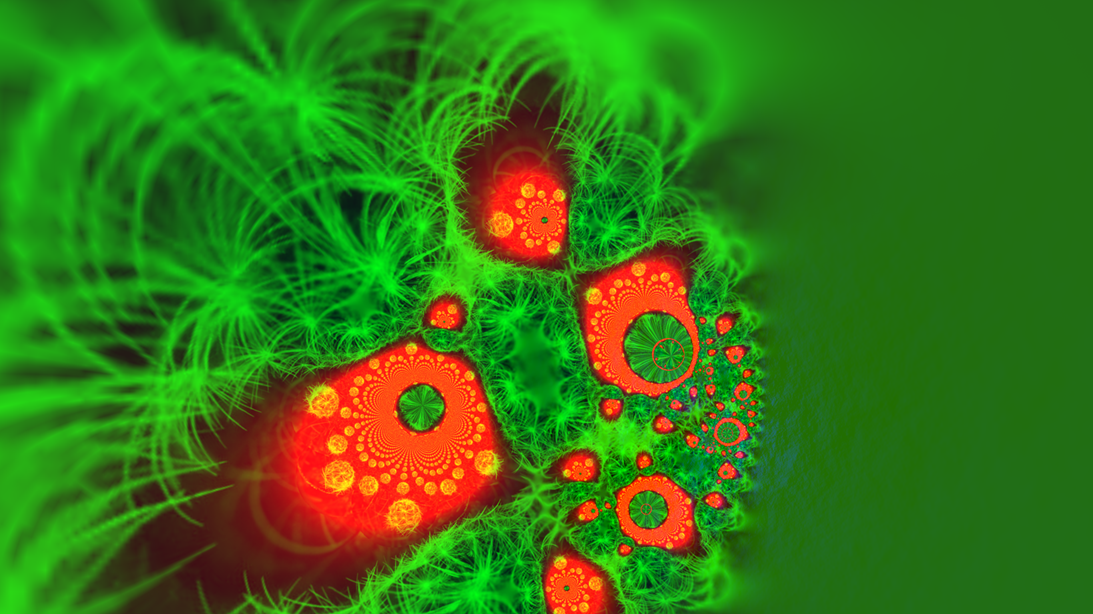 Another cutting edge premiere for ISEA2013 – combining ancient religion and tradition with modern technology, this work is scored for Tibetan singing bowl robots and live flute, with multichannel surround-sound electronic processing and ambisonic field recordings made in Australia and Arizona. A meditation on being present in the landscape, the work is part of an ongoing enquiry into the ways in which we converse with nature.

Garth Paine is currently the Interim Director of the School of Arts, Media and Engineering at Arizona State University, where he is also a Professor of Digital Sound and Interactive Media. He is particularly fascinated with sound as an exhibitable ‘object’. His work includes interactive responsive environments and music scores for dance, generated through real-time video tracking and bio-sensing, and has been shown extensively internationally, with exhibitions and performances in Europe, USA and Australia in 2012/13.

The artist would like to acknowledge the assistance of the Bundanon Trust.