Presented by ISEA2013, SymbioticA and the Powerhouse Museum.

semipermeable (+) looks at the membrane as a site, metaphor and platform for a series of artistic interventions and projects, some commissioned specifically for the show and others selected from the many projects developed at SymbioticA since 2000.

From the earliest to the newest forms of life to be created, the membrane has acted as the definition of self; maintaining integrity, protection and acting as the interface to the world. The membrane is active, selective and fragile. However, the selective membrane can also be a human construct, as humans have evolved a high dependency on edge detection. The strongest visual (and auditory) cues deal with where one thing ends and another begins. This is also how humans tend to arrange – from perception of individual self to societies and nations. SymbioticA brings together 15 artists from different disciplines to present, culturally articulate and re-visit, metaphorically and actually, the notion of the membrane. The artists investigate protocells, infection and DNA through to skins and garments to borders and state control.

SymbioticA - The Centre of Excellence in Biological Arts  at the School of Anatomy, Physiology and Human Biology, University of Western Australia, is an artistic laboratory dedicated to research, learning, critique and hands-on engagement with the life sciences. It is the first research laboratory of its kind, enabling artists and researchers to engage in wet biology practices in a biological science department. It also hosts residents, workshops, exhibitions and symposia.

Video Documentation by Sam James on behalf of ISEA2013, presented by ANAT. 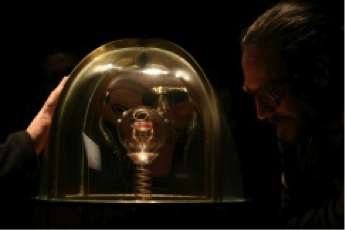 In Potēntia is a liminal, boundary creature of animate and inanimate matter, a speculative techno-scientific experiment that uses a stem cell reprogramming technique called iPS to reverse engineer foreskin cells purchased from an online catalogue into embryonic stem cells, which the artists then transformed into neurons. What results is a functioning neural network or “biological brain” that is encased within a purpose built sculptural incubator, containing a life-support system and an electrophysiological setup that converts neural activity into an unsettling soundscape. 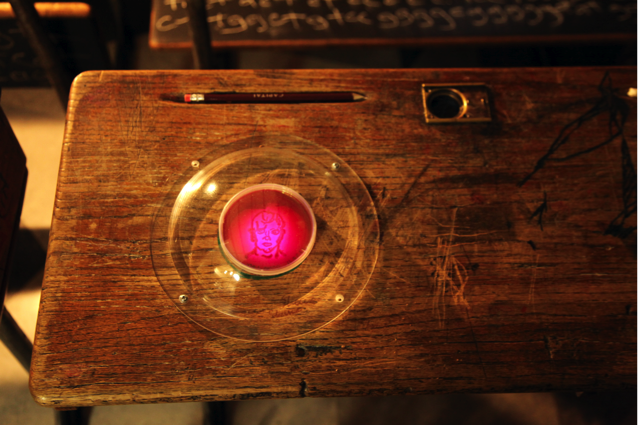 In Proto-animate 20TP a novel code sequence is comprised of 158 DNA bases derived from an ostensibly non-coding region of a gene. This gene known as the APOE4 gene (Apolipoprotein E4) is associated with Alzheimer’s disease in humans. This sequence was inserted into E.coli bacteria and used as temporal paint-media to depict small living portraits. Through this process a previously inanimate, non-coding section of DNA is poetically expressed in interplay of memories and learning within a simulated 1970s childhood classroom. 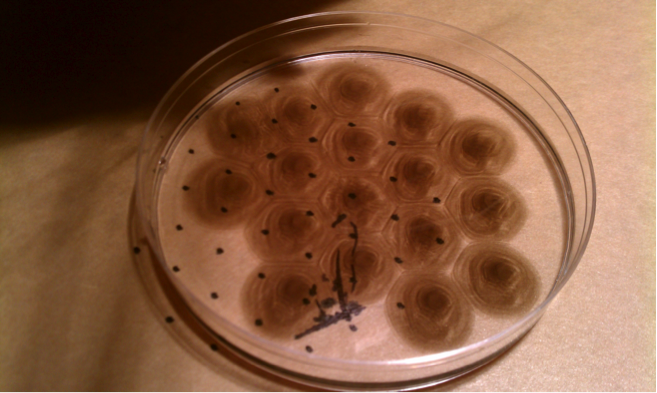 In his 1911 book Stephane Leduc tried to prove that life is merely a chemical process. In a series of experiments he was showing the emergence of life like phenomena of different degrees of complexity. This piece recreates Leduc’s experiments using custom made rapid prototyping printer to create “protocells”. The work deals with cultural amnesia and reimagining. With current attempts in creating synthetic life, it is important to culturally probe into the ideas of the Mechanism of Life.

Assisted by Biofilia, Base for Biological Arts, Aalto University, Finland and developed with funds from the Department of Culture and the Arts Western Australia. When we humans walk in a city, run through the halls of a busy airport, roll through a bus terminal or a train station, we are traveling through not only streets, hallways and stairs, but through microbes. The series of sculptures are made of human and pig skin and biological synthetic virus called Lentivirus, a derivative of HIV strain 1, so that transfection and contagion would occur at the cellular level. The virus, cells and tissue are inert now and the biomaterial reveals areas of bluish brownish stains. 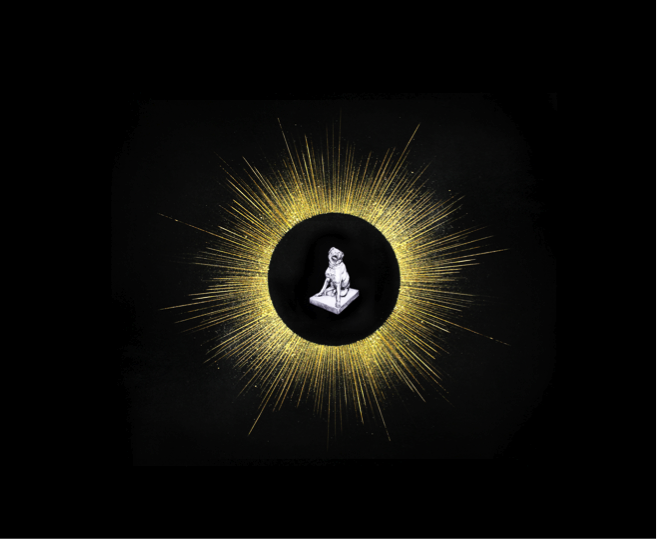 This installation speaks to the contradiction between scientific ‘reality’ and its expression within popular consciousness. The monstrous kynical cell is reduced to an almost invisible dot, unable to live outside of the supports of the laboratory, preserved dead between glass. While the surrounding drawings, allegories of the ancient kynic, reinforce stereotypes and play with the bombastic representation of human anxieties over scientific interventions. Step right up and see this freak of nature – a totem for renewed kynicism.

I died as violence and knew conceit
I died as freedom and enjoyed great pleasure
I fought for my body, and it died 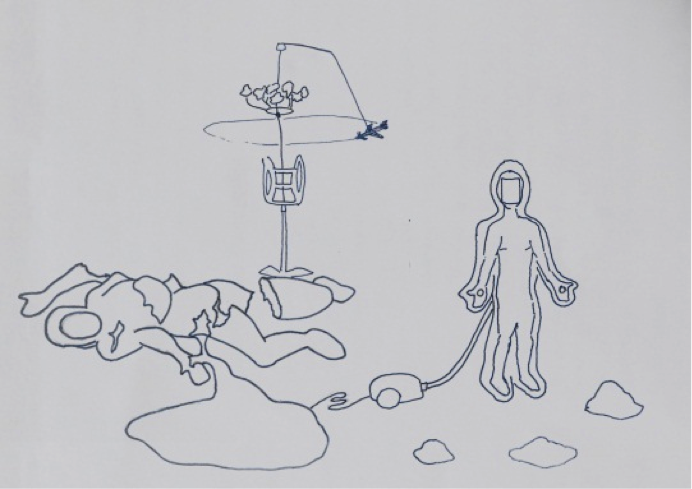 TechnoCulturalBodySuits is a triptych of ethics, articulating different orientations toward the membrane; to be violated, endured & indulged and defended. Each TCBSuit references the violence of biological progression with the centrality of the human body in regards to cultural conceit and social-political mortality. A progressive polemic emerges from the competing & contradictory ethics while I argue for the dissolution of oppressive borders, while paradoxically supporting the same borders/barriers. The titles refer to the poem by Sufi Jalāl ad-Dīn Muhammad Rūmī, translating into English as ‘I Died as Mineral’. This work uses microbiology as an artistic tool. The piece Fibre Reactive is a unique biological garment. By its very existence, this dress aims to raise debate around the contentious manipulation of living entities as commodity exploring culture / nature interfaces through a body – cloth dynamic. This project explores the language used to advertise “cosmeceuticals”, an emerging class of skin care products claiming pharmaceutical benefits at the cellular level. This language is taken literally here and applied to the “material” it refers to. Skin cells have been manipulated in the laboratory to form letters and words which in effect “re-incarnate” the promises of the cosmeceutical industry. While this biological material is shown to be controllable to a certain extent, moments of successful stabilization are quickly followed by entropy.

Supported by the Arts Foundation of North Rhine-Westphalia, the Saxon Ministry of Science and the Fine Arts, the Goethe-Institut Australia and the Academy of Media Arts Cologne. 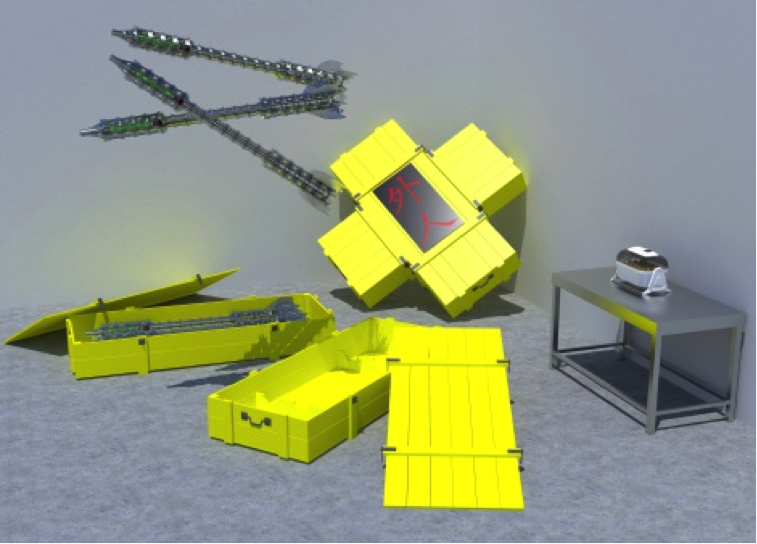 Membranes are selectively permeable structures, controlling the exchange of ions in our synapses, structuring the flow of surveillance information at airport security, or filtering migration to our shores.  SPPS drifts in interstitial spaces between biology, politics, culture and history recalling how the membrane functions as border, a cultural and linguistic filter and a generator of difference. SPPS is an omnisexual bacterium ingesting histories and narratives that associate through powerful metaphorical bonds. Decay can be a sudden, long, visible or invisible process. It may take place across vastly different time scales and or in forms that are difficult for our human senses to comprehend. In Sound of Decay, a computer “listens” to the events inside the desiccator, and creates an audio frequency range we may comprehend. Sound generated by decay is extremely low and soft; inaudible to humans. The desiccator provides an auditorium for the performance, complete with an amplifying stage.

Svenja Kratz
HEK293T: The transformation of Johni or Oliver, 2010 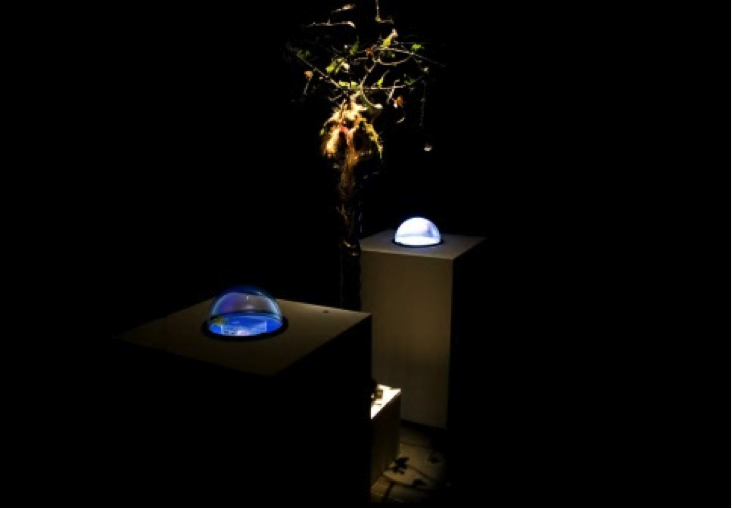 HEK 293T: The Transformation of Johni or Oliver comments on my experiences working with basic genetic engineering techniques during a three month residency at SymbioticA in 2010. In particular, the work explores the transformation of human embryonic kidney cells using green and red fluorescent proteins isolated from marine organisms. The work focuses on the transformation of the cells and the strange conflicts new biotechnologies inspire. 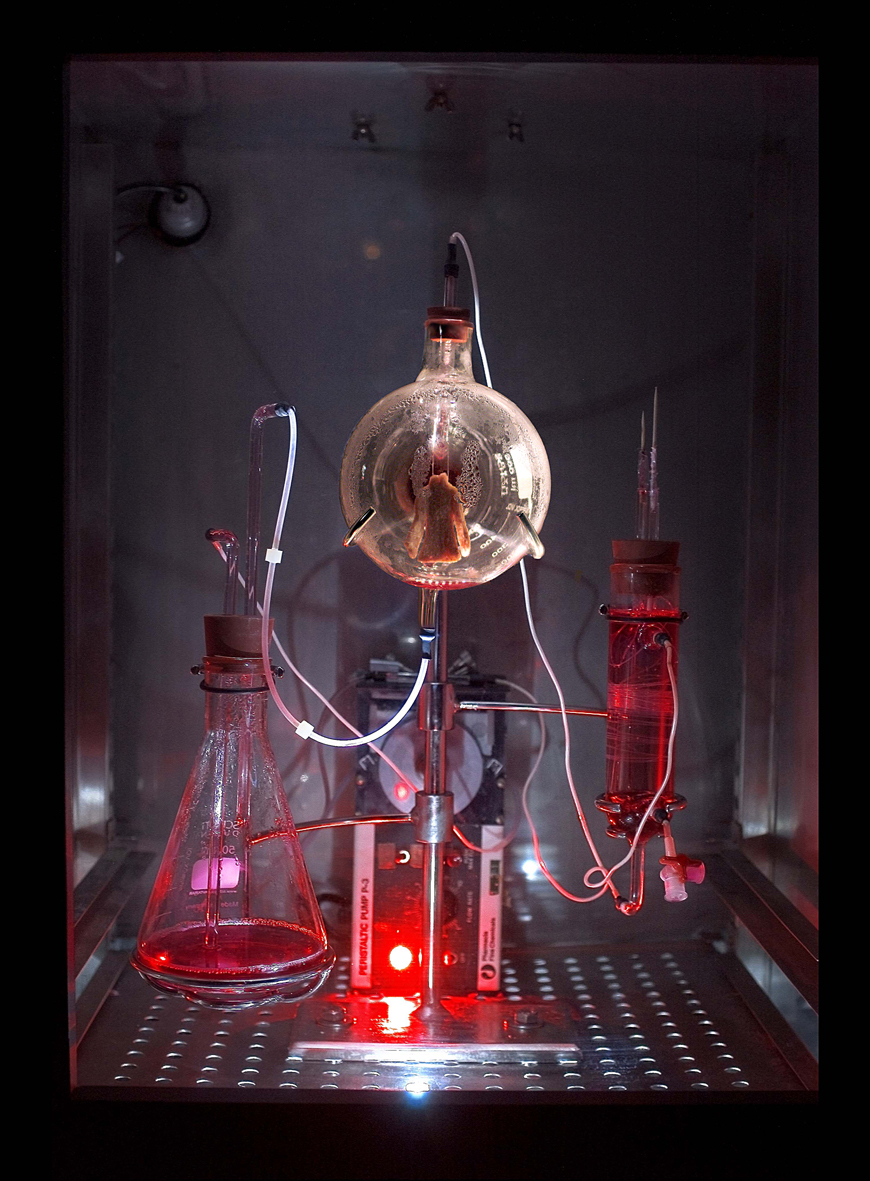 Victimless Leather is grown from immortalised cell lines, cultured to form a living layer of tissue supported by a biodegradable polymer matrix in the form of a miniature stitch-less coat. It’s grown inside a custom made perfusion chamber (inspired by the organ perfusion pump originally designed by Alexis Carrel and Charles Lindbergh). It is has automatic system which drips nutrients into the polymers and feeds the cells.   The Victimless Leather project presents an ambiguous view of technological price our society needs to pay for achieving ‘a victimless utopia’.

Supported by ArtsWA in Association with the Lotteries Commission.