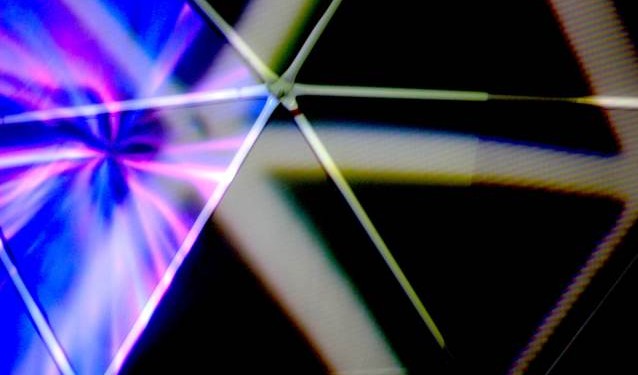 SoundLabyrinth explores the relationship between sound and the body, and the sense of meaning or ‘sacredness’ that emerges from that relationship. The work uses ambisonic sound and immersive video projection, set within a 6m diameter geodesic dome. Visitors will be able to explore a number of different sound worlds located within the space of the dome, comprised of material contributed by Indian and Australian poets Nazid Kimmie (Australia/South Africa), Jameela Nishat (India) and Alice Melike Ülgezer (Australia/Turkey), as well as field recordings and sound designs by Mark Pedersen.

Utilising the immersive audio/visual infrastructure of SoundLabyrinth, Action A/V consists of three art objects, MOTION, SPEECH and VISION, which are designed to engage the perceiver both physically and mentally, and to represent that engagement through simultaneously showing the results of their physical and their mental interactions with it. The three objects overtly rely on the interaction and interpretation of the perceiver in order to become artworks. The work surrounds the perceiver, responding to subtle and intuitive interactions which entrance and fascinate.

SoundLabrinth & Action A/V are being shown as part of the workshop Gesture, sound and place: an immersive exploration of body-mapped sonic territories in two audio/visual works: SoundLabyrinth & Action A/V.

Mark Pedersen is a Melbourne-based artist working primarily in sound and image design. He has a PhD in computational linguistics and is currently completing Masters research on the topic of sacred sound at the Victorian College of the Arts, University of Melbourne. He has spent time in India and the Middle East, and as a computational linguist with a focus on symbolic approaches to syntactic analysis, he has made contributions to computational grammars of Hindi and Arabic. His concerns as an artist centre around the intersection of human activity and the Divine, with particular reference to embodied cognition, improvisational performance and gestural interfaces which better enable the performer to ‘fuse’ with their performance environment. His work has been performed in Australia, Japan, Europe and India. For examples of his work go to www.chailight.com.

Roger Alsop is a Melbourne-based audio/visual artist and educator. He has a Masters in Computer Music Composition and is currently undertaking PhD research on translating text, motion and visual art to audio/visual installation works. As an artist, his focus is on the links between artforms and art-making processes, and in exploring and developing points of meeting and convergence between cultures and locations. As an educator he is interested in developing conceptual and technical skills that allow artists to confidently question their world and express their answers with skill and technical excellence. His work has been performed in Australia, Asia, Europe and the USA. For examples of his work go to sites.google.com/site/rogeralsop/