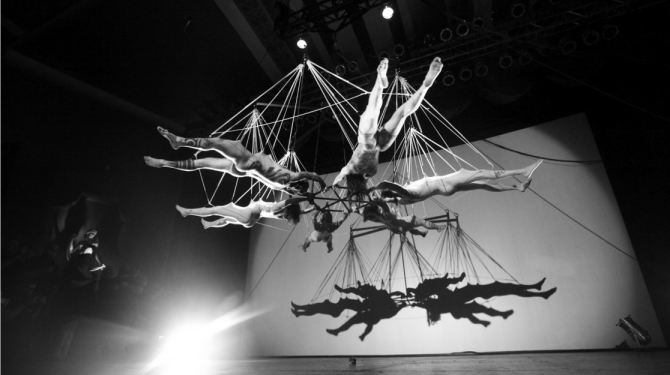 Presented by ISEA2013, the Museum of Contemporary Art and National Institute for Experimental Arts at COFA, UNSW.

Bodies increasingly perform as extended operational systems, with ‘mixed’ and ‘augmented’ realities. The contemporary chimera is a hybrid biological machine and virtual system. Aliveness and affect are expressed in choreographies of remote interface and interaction, of both ‘fractal’ and ‘phantom’ flesh.

Stelarc explores alternative anatomical architectures. He has performed with a Third Hand, a Stomach Sculpture, an Exoskeleton and a 6-legged robot. Performances such as Fractal Flesh remotely actuate the body with electrical stimulation, while Ping Body and Parasite explore the body choreographed by internet data streams. Prosthetic Head, a conversational agent that engages in dialogue with all comers, now has further embodiments with the Articulated Head, the Floating Head and Swarming Heads. Ear on Arm is a surgical and cell-grown construct that can be internet-enabled for remote access. Stelarc is presently Chair in Performance Art, Brunel University, West London. In 2010 he received a Special Projects Grant from the Australia Council and was awarded the Ars Electronica Hybrid Arts Prize. His artwork is represented by Scott Livesey Galleries, Melbourne.

Video Documentation by Sam James, 9 June 2013 on behalf of ISEA2013, presented by ANAT.