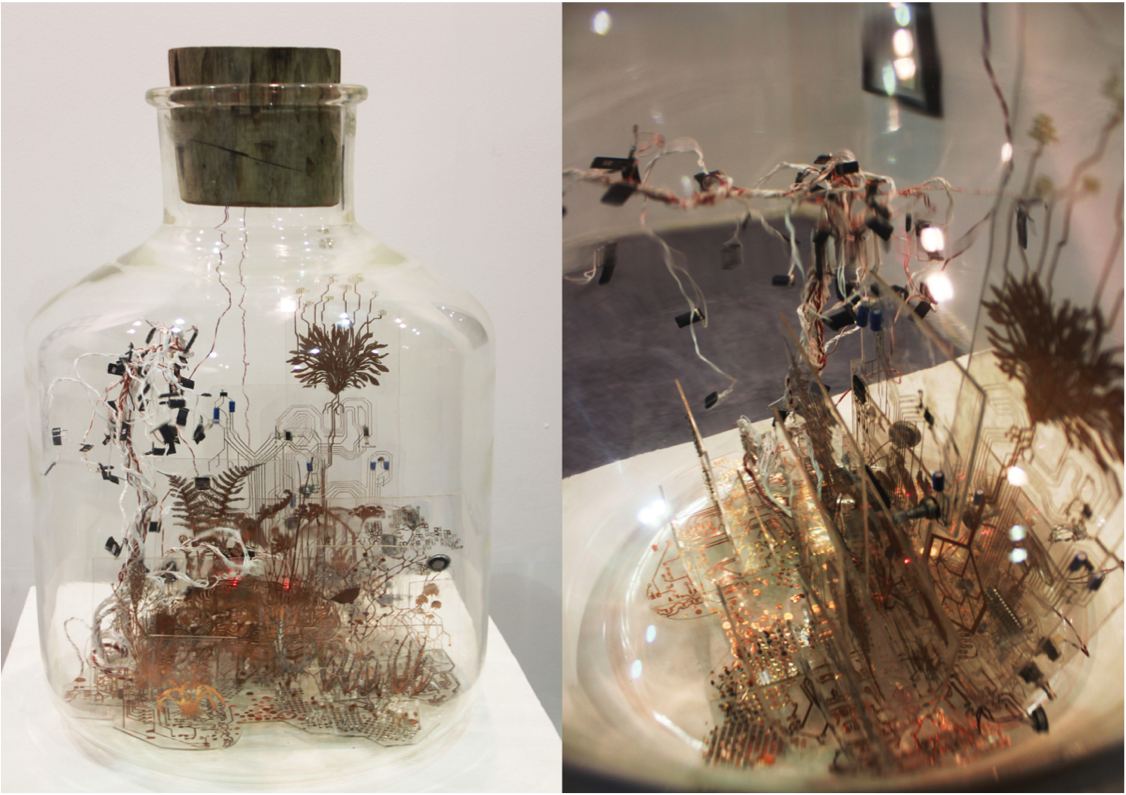 Download the Catalogue Essay for ISEA2013 Exhibition at Verge Gallery by Greg Shapley.

This diorama visualises a future where nature and technology are in synch. Inspired by biomimicry, it suggests that nature, imaginative by necessity, has already solved many of the problems we are grappling with: energy, food production, climate control, non-toxic chemistry, transportation, packaging, and a whole lot more. Animals, plants and microbes are the consummate engineers. Nature has found what works, what is appropriate, and most importantly, what lasts here on Earth. By creatively investigating and exploring technology, eLEMenT:EARTH helps us to both imaginatively experience and critically reflect on the implications of technology, and also looks into alternative energy.

ISEA2013 acknowledges ARTCapital for their generous support in the presentation of this work.

Nandita Kumar is a new media artist who works in various mediums to create immersive environmental spaces and explore the elemental processes by which humanity constructs meaning from their experience. She constructs sensory/narrative experiences through the use of various materials plus sound, video/animation, performance and technology. Her art practice revolves around the concepts of body, locating inherent patterns, hybridity, technology, immersive environments, and the synergy between nature and our current urban environment. She holds a joint BFA from MS University, India and Auckland University (Elam School of the Arts), and has completed her MFA in Experimental Animation at California Institute of the Arts, LA. 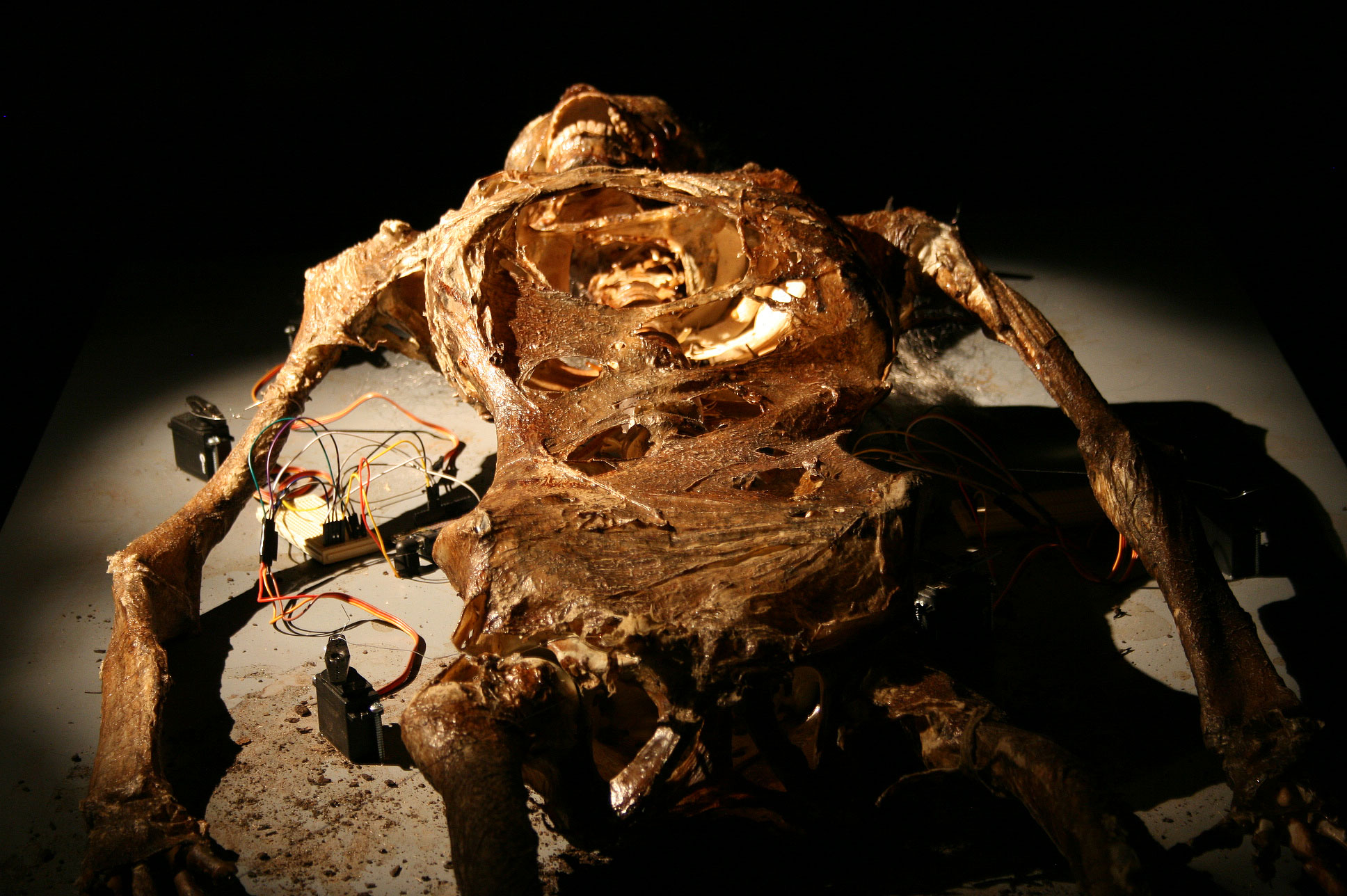 How can you tell if a hippy is alive or dead? Referencing Paul Thek’s 1967 installation The Tomb (also known as Death of a Hippy), which contained a body cast of the artist as a dead hippy, Haig plays on notions of transcendental states and past lives in his attempt to simultaneously reanimate the concepts of artist, artwork and hippy. By casting contemporary technology as the catalyst in this exploration of a Gothic theme, the re-animation of a corpse, he highlights technology’s increasingly pervasive nature, extending its reach into, or beyond, the grave. From another perspective the work refers to the art world’s enduring relationship with death, in which the ‘value’ of the artist often increases only after their death; the art museum as a kind of mausoleum embalming ‘dead’ artworks; meanwhile the resurrected zombie hippy represents contemporary art, media and technology, where nothing is truly dead or off-limits, and everything can be brought back to life, reborn, remixed, recombined, reconfigured … . In many respects contemporary media is the media of the undead, the half life, the zombie; like the hippy half a century ago, it is the new ‘natural’ state of existence.

Ian Haig’s work focuses on themes of the human body, abjection, transformation and attraction/repulsion, and has been exhibited at The Experimental Art Foundation, Adelaide; The Australian Centre for the Moving Image, Melbourne; Gallery of Modern Art, Brisbane; The Museum of Modern Art, New York; Centre Georges Pompidou, Paris; and The Ian Potter Museum of Art, Melbourne. In 2003 he received a fellowship from the New Media Arts Board of the Australia Council, and in 2013 he curated the video art show Unco at The Torrance Art Museum, Los Angeles. 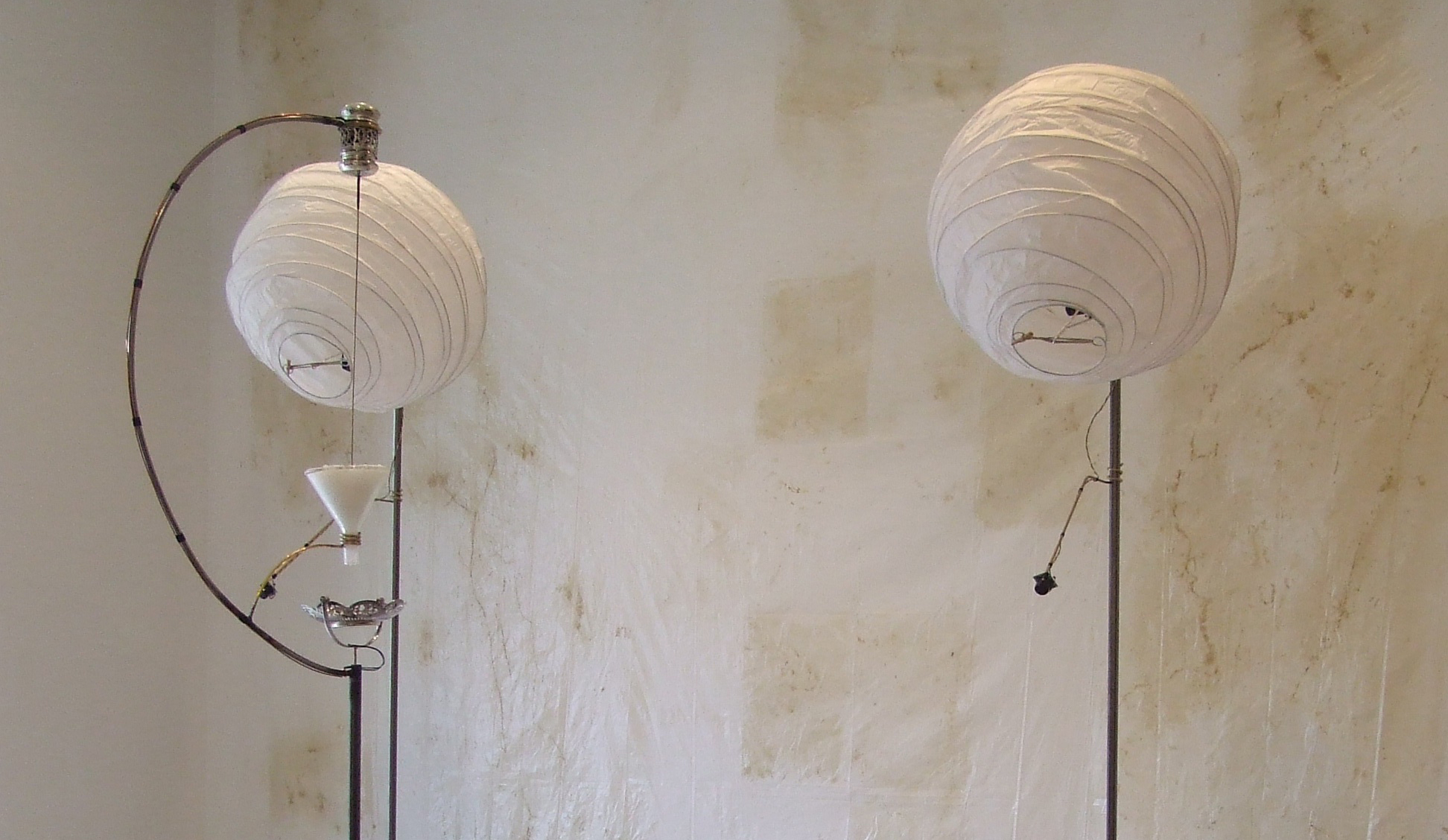 A continuation of Raewyn’s investigation in sensing the human plume, Downwind explores our differences in olfactory sensitivity and selectivity due to the genetic basis of human olfactory variability. The human plume trails downwind from each body carrying with it signature odours and emotional and environmental olfactory architectures which are the fragrances of our civilisation and times. They are the olfactory cyphers of change, yet sensing them is defined by a combination of genetics and personal experiences. The whole of nature is communicating by olfactory signals that we usually disregard, immersed as we are in a synthetically flavoured and fragranced atmosphere. The revolutionary wind of genetic discovery suggests that we may not all be perceiving the same reality. We’re working with scientific research in olfaction to explore the behaviour-changing signals of smell,  beginning  with  fugitive smell compounds as well as ones  known to  elicit  specific   anosmias–the inability for some people to smell a particular odour that others can easily detect.

Over the past 2 years we’ve collaboratively created experiments around olfactory perception.

Brian Harris has been devising computer controlled mechanisms and embedded devices most of his life. He studied  science and electronics. An independent designer, he creates large scale finely tuned adaptive mechatronics and bespoke equipment. His inventions for motion control, stabilising camera mounts for aerial photography and robotic trajectories are used in local and international tv commercial and film productions.

Please place a little sugar on your tongue to help amplify your sense of smell.

Place your upturned hand on the silver dish to receive a few grains of  sugar and push it sideways til the hammer rotates and sugar falls.

As you approach the lid opens to allow spooning a little sugar into your hand.