Electric Nights transforms Parramatta’s River Foreshore with interactive artworks, performances and food. Experience the River at night as the foreshore lights up, bringing together some of the world’s most engaging and thought-provoking artists.

Over two evenings, audiences will be captured by striking physical and visual performance and an electronic spectacle.

A cross-cultural dining experience through food, film and dance brings the bustling streets of Java to Parramatta. Audiences can interact with a mass of led lit balloons, participate in a kinetic sculpture on bikes to generate energy and watch stilt performers with roaming projection.

Don’t miss this opportunity to experience electronic art after sunset on the Parramatta River.

Parramatta, the city at the heart of Sydney.

Western Sydney’s capital has undergone 10 years of rapid growth, and has emerged as a dynamic contemporary city with a busy business and social scene that reflects the cultural diversity of Greater Sydney.

Parramatta celebrates the traditions and festivals of the diverse, multicultural community that call this city home.

For information on how to get there and a map, download the Electric Nights Flyer. 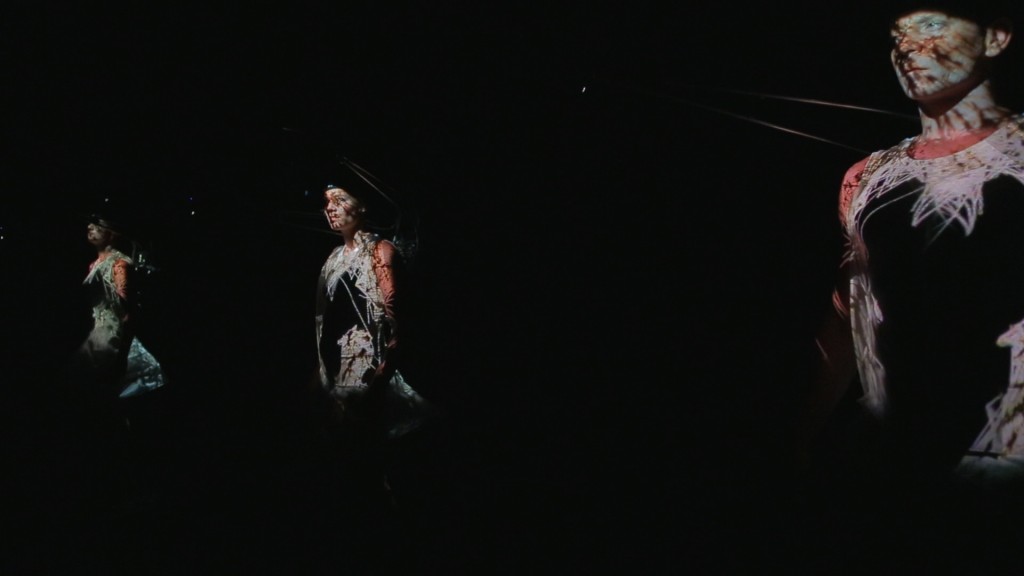 Visually stunning, Phosphori’s shimmering images emerge from the darkness with the grace and fluidity of human movement. Images dissolve and reform as the performers sweep across the space, towering above the crowds. Phosphori embraces the world of technology to stunning effect, bringing to the streets a hi-tech performance collaboration between human and machine. These cyborg figures transport us to a future of beauty and grace fed by colour and light.

Lee-Anne Litton is a performing artist originally from Perth. She is an award-winning gymnast with over nine years’ training, holds the 1994 National Champion title and was selected for the 1996 Atlanta Olympic squad. Lee-Anne is trained in physical theatre, theatrical improvisation, acrobatics, dance and contact improvisation. She has extensive aerial training, specialising in bungee and harness work along with other aerial apparatuses such as tissue, loop and aerial hoop. She has performed nationally and internationally with Legs on the Wall, Opera Australia, Strings Attached, Helium Collective, and also solo. Lee-Anne is a founding member of Strings Attached Physical Theatre Company.

Kathryn Puie has performed nationally and internationally with Stalker (NZ, South America, Europe, the UK, Korea and Singapore), Branch Nebula (Brazil and Mobile States tour 08), Spare Parts Puppet Theatre (Perth and Broome), West Australian Opera (Perth), Legs on the Wall (Melbourne), and Theatre of Image (Sydney). She has a BA (Dance) from WAAPA and has extensive experience as a performer in various styles of dance, stilt walking, aerials and puppetry. In 2009 Kathryn choreographed a site-specific dance work performed on the rooftops in Redfern. In 2010 she was part of the first development of Return To The Trees with Strings Attached and Stalker’s Shanghai Lady Killer at the Brisbane Festival.

David Clarkson founded Stalker Theatre in Sydney in 1988. Since that time Stalker has gone on to become one of Australia’s top internationally touring physical theatre companies, with hundreds of performances throughout Asia, Europe, South America and Australasia. David has over twenty-five years’ experience as a physical performer / devisor, and has conceived and directed several of Stalker’s shows. His work has varied between solo performances, professional ensemble work, large and small scale community outreach projects and Olympic Opening Ceremonies. In 2007 he was awarded the Rex Camphorn Scholarship, New South Wales’s top theatre award for an outstanding lifelong commitment to innovative theatre.

Alejandro Rolandi is a visual and performing artist from Argentina. He has danced contact improvisation for the last 12 years, and has taught in Sydney since 2002. He has worked with Stalker, David Corbet, Jacob Lehrer, Force Majeure and the dance department at UNSW. In 2008 he toured with a Legs on the Wall performance at the 2008 Beijing Olympic Games. Alejandro has had training in physical theatre, pantomime, acro-balance and circus, and is Director of Strings Attached Physical Theatre Company.

Peter Kennard is a percussionist, composer, producer and musical director with a career in theatre and musical performance spanning 20+ years and a Masters in Contemporary Improvisation from Macquarie University. He has contributed compositions, recorded soundtracks and musically directed live performance for over 100 productions for many of Sydney’s major theatre companies and high profile public events, festivals and celebrations, and has represented Australia for DFAT with the wellknown world/folk ensemble Sirocco. Compositions for theatre productions include: Stalker Theatre’s MirrorMirror, Red and Four Riders, Theatre of Image’s Snow on Mars (Sydney Festival 2011), Pixel and Friends (2008), and Mad, Bad and Spooky (Sydney Festival 2002). Peter has also composed for Legs on the Wall, Urban Theatre Projects, Powerhouse Youth Theatre and others. 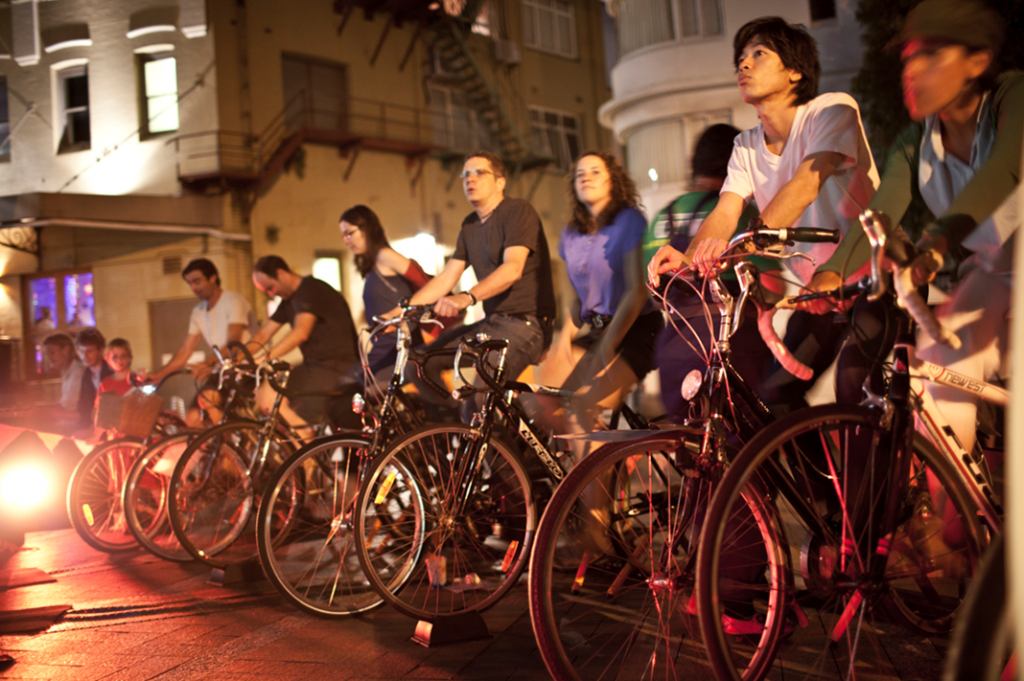 We Make This City, Magnificent Revolution, Taylor Square, Sydney, 2012.
Curated by the College of Fine Arts, UNSW and the City of Sydney.
Image credit: Conor Ashleigh.

Cooperate to pedal a tune … participants on five custom-modified stationary bicycles generate audiovisual rhythms, actively ‘playing’ the work as an instrument. Through communal electricity generation, the work explores embodied energy, ecological sustainability and cooperation in biological organisms. Powered solely by participants’ pedalling, it also references biomimesis of bioluminescence in fireflies, as they synchronise their flashing. The title, pronounced ‘I See A Bright Future’, references the role of cooperation and negotiation in producing a future that will be dominated by how ‘brightness’ (ie. lights/energy) is produced. 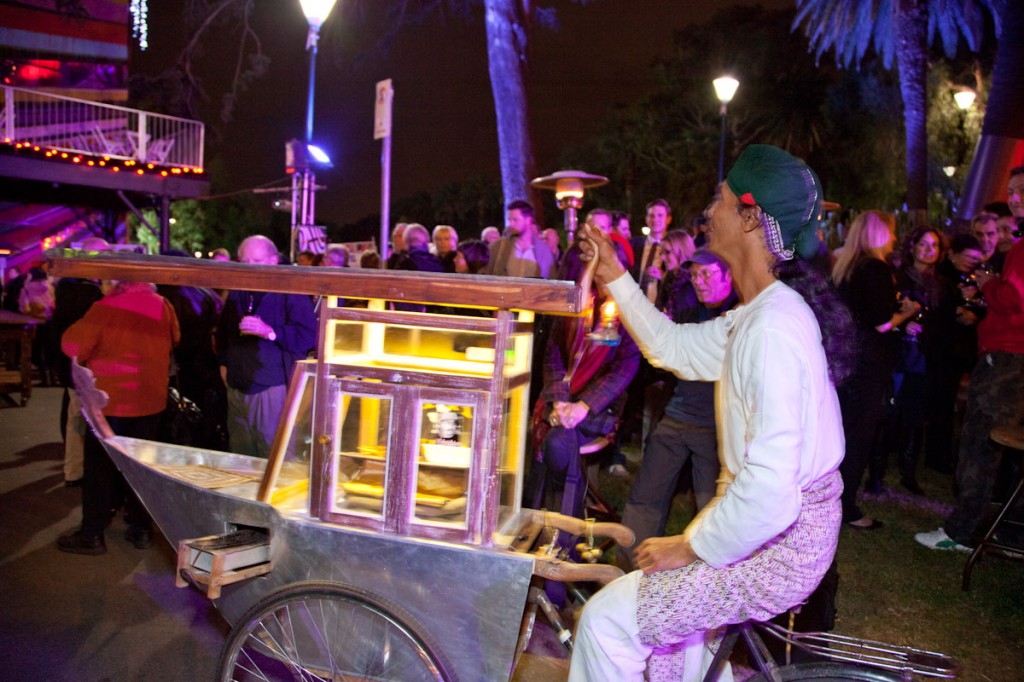 Feeling peckish – and chatty? This intimate exchange between cultures and cities dishes up a live fusion of food, film and dance between Australia and Indonesia. A fleet of ‘gerobaks’ – traditional Indonesian food carts – is linked between Sydney and Yogyakarta (Central Java) through multi-channel video streaming, alongside in-cart video art and a multimedia dance environment. Exploring qualities of openness and connection, Grobak Padi centres upon a mode of relating that is open to life, to things both being themselves and belonging together. The gerobaks are the life-blood of Jogja’s streets, while images of the padi, or rice field, come to evoke a sense of gratitude, for appreciating the abundance we already have. Don’t miss this chance to share a meal, and more, with our closest neighbours!

Melbourne-based Michael Hornblow works across video, performance, art and design to explore affective relations within and between the image, the body and the constructed environment. He recently completed practice-based doctoral research in the Spatial Information Architecture Laboratary at RMIT, and has produced film/video, installation and performance works in Australia, New Zealand, Asia, Europe and Africa.

Tony Yap is a dancer and choreographer, the Creative Director of Melaka Art and Performance Festival, and Artistic Director of Tony Yap Company. He is committed to the exploration and creation of an individual dance theatre language that is informed by psycho-physical research, Asian trance dance and Butoh. Yap has collaborated with many companies and individuals worldwide, and has received various fellowships, awards and grants.

Created by Michael Hornblow, Tony Yap and Agung Gunawan. Hornblow, Gunawan and Yap have been working together since 2008. Possibly ISEA2013’s most beguiling experience! Surrender to beauty and wonder when entering this responsive ‘cloud’. Its creators recommend that participants “walk through the cloud, touch the balloons, avoid cables, contemplate the electronics components at close hand, make noise, and move freely” – but also suggest spending some time standing back and enjoying the cloud as a whole, whilst other visitors trigger interlinked audio and visual responses with their sound and movement, and ‘virtual’ visitors also tinker with the cloud’s coloration. Prepare to be enchanted!

Tomás Laurenzo is an artist, designer, researcher and engineer. He is as Associate Professor in Computer Science at UDELAR University, and also director of UDELAR’s Medialab, Research Associate of the School of Psychology and Visiting Professor at the School of Architecture. Tomás is also a Research Fellow at Microsoft Research. He holds a Masters of Science, a Computer Engineer degree and a Bachelors in Computer Science degree, and his Masters thesis (ìNew media artî) has been considered a pioneering work in Uruguay. He is a PhD candidate, and has publications in the areas of art, HCI, Software Engineering and Mobile Robotics, while his artworks and performances have been shown and awarded both locally and internationally.

Christian Clark is an engineer, artist, and musician. He works mainly in the private sector, and as Assistant Professor at the Medialab, School of Engineering, UDELAR University. Christian is currently completing his Masters of Science degree, developing his thesis on Human Computer Interaction and Interaction in Public Places.

Pablo Gindel is a musician, artist, and an electronics expert. His fields of expertise ranges from robotics, through augmented reality and electronics, to art. Pablo has worked on various projects at UDELAR University, and is Director of MVDRobotics, a company that commercialises Urduino (an implementation of the Arduino hardware distribution). He has also exhibited new media art, including in the Centro Cultural de España in Montevideo, and the National Museum of Visual Arts (MNAV) of Uruguay.

Fabrizio Devoto is an architect, artist, and musician. He is Director of BAU Architecture studio, an active and promising construction company, and fills his time with crazy artsy projects.

Laurenzo, Clark, Gindel and Devoto are all born and based in Montevideo, Uruguay.