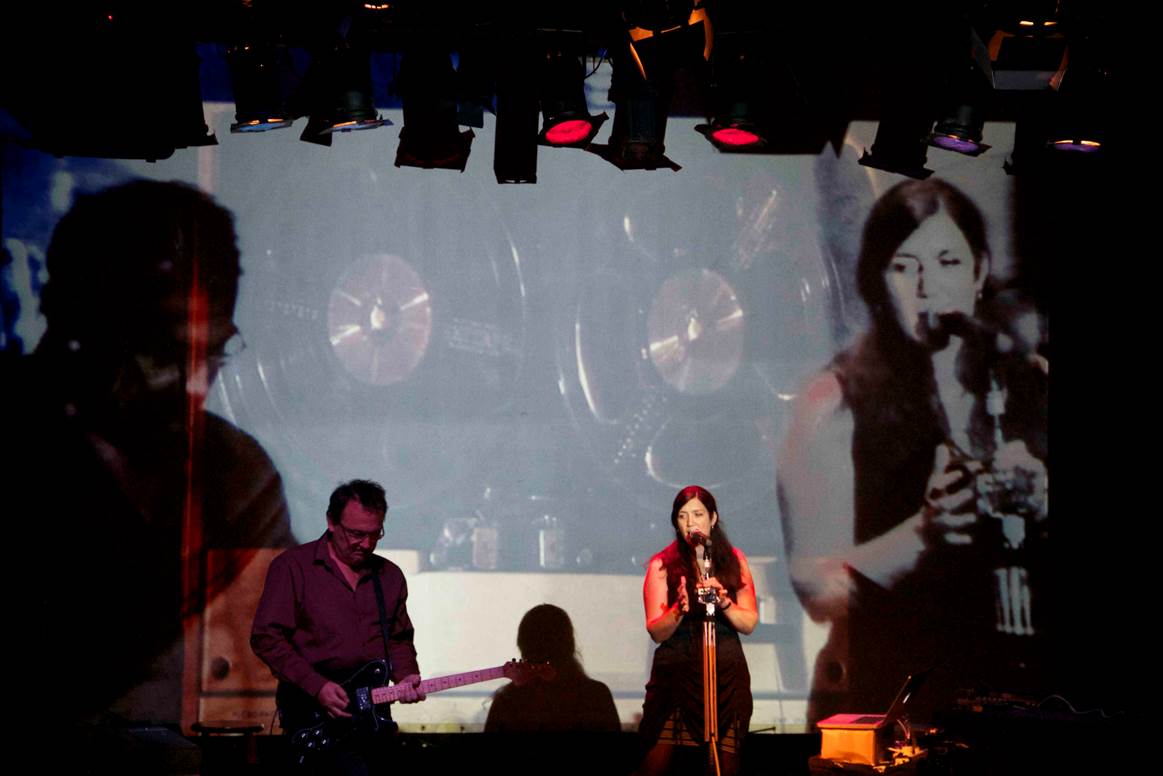 Macrophonics II presents new Australian work emerging from the leading edge of performance interface research. The program addresses the emerging dialogue between traditional media and emerging digital media, as well as dialogues across a broad range of musical traditions. Recent technological developments are causing a complete reevaluation of the relationships between media and genres in art, and Macrophonics II presents a cross-section of responses to this situation. Works in the program foreground an approach to performance that integrates sensors with novel performance control devices, and/or examine how machines can be made musical in performance. The program presents works by Australian artists Donna Hewitt, Julian Knowles and Wade Marynowsky, with choreography by Avril Huddy and dance performance by Lizzie and Zaimon Vilmanis. From sensor-based microphones and guitars, through performance a/v, to post-rock dronescapes, movement inspired works and experimental electronica, Macrophonics II provides a broad and engaging survey of new performance approaches in mediatised environments.

Initial R&D for the work was supported by a range of institutions internationally, including the Australia Council for the Arts, Arts Queensland, STEIM (Holland) and the Nes Artist Residency (Iceland).

Sydney-based artist Dr. Wade Marynowsky works across art and technology to develop new audience experiences. His work critiques the way in which ‘new’ media art has engaged – or failed to engage – with an audience. Forged in the artistic legacy of conceptual and performance art of the 1960s, the work is fundamentally concerned with questioning classical spectatorship and performance. His robotic / media installations combine both artificial life and live art, causing technology to perform within a system of programmed parameters that allow the work to continually unfold and evolve. His works “straddle humour, high-camp and a host of unnerving thematic orientations to absorbing effect” (Dan Rule, 2012).

Julian Knowles is a composer, performer, media artist and researcher specialising in new and emerging technologies. His creative work spans the fields of composition for theatre, dance, film and television, electronic music, sound design and media arts, popular music and record production. His practice-based research demonstrates a long-standing, high-level engagement with technologically-mediated music and sound practices and the relationships between audio-visual media. This has resulted in the creation of more than 50 innovative works that have been disseminated by high profile record labels, broadcasters and art institutions internationally. In the course of his career Julian has worked with many of Australia’s best-known musicians in the experimental music scene, and has been a member of the Australian electro-environmental audio group Social Interiors since the mid 1990s. As a solo artist, his music and audiovisual works have been presented at events and venues such as the San Francisco Museum of Modern Art, Experimental Intermedia (New York), What is Music?, Australian Perspecta, Liquid Architecture, the Melbourne International Film Festival and Sydney Opera House.

Donna Hewitt is a vocalist, electronic music composer and instrument designer. Her primary interest in recent years has been the investigation of new ways to interface the voice and movement with electronic media. Her work has attracted funding from the Australia Council for the Arts, most recently with all-female collective Lady Electronica. Performance highlights include: Lady Electronica Live, Queensland (2012); TES2012, Toronto, Canada; Brisbane Festival’s Under the Radar (2011); SEAM2011, Sydney; Understanding Visual Music 2011, Montréal, Canada; ICMC (USA, Ireland, UK); Liquid Architecture 7, Sydney; and The Great Escape, Sydney (2006, 2007). Donna holds a PhD in music, and is currently lecturing at the Sydney Conservatorium of Music.