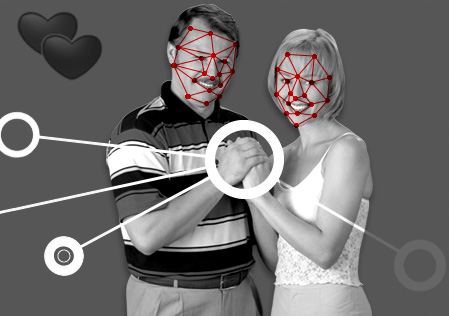 ISEA2013, in collaboration with Vivid Ideas, presents a keynote address from Italian media critics and hacktivists Alessandro Ludovico and Paolo Cirio, whose infamous online project Face to Facebook involved stealing 1 million Facebook profiles, filtering them with face-recognition software, and then posting them on a custom-made dating website.

Conceptually hacking big online corporations has proven to be a symbolic, dangerous and revealing artistic process, challenging funding principles of the digital economy and of digital communication at large.

Face to Facebook work is the third part in the Hacking Monopolism Trilogy which also includes hactivist projects centred around Google (Google will Eat Itself) and Amazon (Amazon Noir).

Cirio is a media artist who hacks and orchestrates media through videos, coding, social media, digital prints, public interventions and audience participation, in order to create controversial provocations and to tackle social issues. Exploring information as a magmatic material that can be shaped, he sculpts it by fabricating stories, processing data and contextualising contents, creating sculptural structures of information in which layers of media are composed in order to reveal unexpected forms. His projects have been sustained by awards, residencies and commissions and featured worldwide.

Ludovico is an artist, media critic and editor in chief of Neural magazine since 1993. He has published and edited several books, and has lectured worldwide. He is one of the founders of Mag.Net (Electronic Cultural Publishers organisation), and has also served as an advisor for Documenta 12‘s Magazine Project. He has been guest researcher at the Willem De Kooning Academy in Rotterdam, and teaches at the Academy of Art in Carrara.

You will need to provide confirmation of your registration.